It all started in a dream, from which I managed to consciously wake up and begin writing down the song I was hearing. I subsequently cancelled all plans for the day and sat at my piano working out harmonies and new lyrics to accompany the first few lines which came directly from the dreamworld. Being a fully paid-up member of The Surrealist Party, I often find inspiration in dreams and sleep, perhaps more so than this waking state we pretend is real. So please don't expect your average lovesong! In the dream a woman called Ashley was singing a song (Ashley Maher perhaps?) but my recomposition of it has turned out to be a joyous depiction of my paradisical new home, scored for piano and voice.

I was on Cloud Nine all day, having never written a song quite so fast. In the evening, the drummers of Secret Bass came round to rehearse for our gig tomorrow, and so afterwards I performed my song to the gathered throng, albeit with lots of mistakes. Little did I know that Justine was also simultaneously performing her own new song at a folk club that she'd just written the day before! :-)

Secret Bass were asked to perform at a charity event at the Multiple Sclerosis Trust to raise awareness for their My Supper campaign. Their offices are in the Spirella Building in central Letchworth, a huge old Victorian building that was originally a corset factory, but due to the changing fashions of undergarments is now offices. We set up in the vast courtyard garden surrounded by high offices on three sides, resulting in crazy acoustics for our drums, but the echoes were nice for our singing.

Our full Away Team consisted of Ruth, Bizia, Ian, Marjolein and Steve, together with newly trained recruits Patrick, Ness and Rozanne. Our brief was to play a fanfare of African drumming music to draw people from the various other companies in the building out of their offices at 5pm on this fine Friday afternoon, where a buffet awaited them, in order to spread awareness about what the charity is about and hopefully garner some support. We played Kuku, Yankadi/Makru, Gambian Rhythm, Afrocubanites, Djole, as well as singing Suley Maniye and Ajomase, getting the audience to join in too. We had a grand time, singing and playing our hearts out and initiating our new Agents into the Circle. Sadly most of the office workers were either trapped in their hives with PHBs hovering or had to rush home in the rush hour, but the general reports were of large enjoyment ("Can't we have this more often?") with people opening their windows to listen, even if they were too sheepish to come down and join in. Unfortuately MS Trust didn't get many interested parties offering support, nor did I win the multitudes of contracts from the business leaders of Letchworth for Corporate Team Building workshops I was hoping for.

Vitae Drummers were invited to play to celebrate the 45th birthday of the White Lodge Centre near Chertsey in Surrey. This is an amazing place which caters for special needs and disabled children, and has lovely architecture and grounds: curved walls, gently sloping wheelchair-friendly walkways through the gardens and inspiring, dedicated staff. There are nice touches everywhere: rounded desks without corners to crash into, spongey floors to minimise injury from falls, light tubes in the roof to bring in daylight into inner rooms.

This was for us a slightly sad occasion, as we were wishing goodbye to our dun dun player Anthony, my partner in crime on the bass drums, although he will be returning sometimes when his teaching job in Cambridge allows. So all the more reason to play a storming set which had the gathered crowd of five hundred enthralled. There was some great dancing and singing, and I'm glad we recorded it for posterity - afterwards Anthony sat listening back to the whole 35 minutes with a large grin :-)

While packing away I walked past a guy in chair who raised his arm and high-fived me :-) The vibe was of intense warmth and appreciation and we left glowing, as if radioactive.

No point going home just yet... Travelling in convoy, we zipped up th M40 to Cropredy near Banbury, to catch an evening of fine music at the African Linx festival. In January we'd performed at a gig in the village hall, but this year the event had grown considerably, now being held in a field near the canal, with everything being donated (PA, stage, etc.) to raise money for projects in The Gambia. As night fell we listened to a nice band called Redox, and I bought a djembe and a new African suit from a stall there called Goodies From The Gambia. Then we danced in the darkness to the wonderful kora playing of Jali Fily Cissokho from Ziguinchor accompanied energetically by Modou Diouf playing sabar drums. I didn't like the next group, the bastard child of heavy metal and drunken Irish jig music, so we went and chatted until midnight before I drove home, still singing my new song.

This was the first of hopefully many drumming camps held at my house in the country - being without neighbours has distinct advantages as a drummer! Most people couldn't attend today, and no-one camped over, as was the original idea, but Steve and Marjolein came in the afternoon to learn some new music which I'd studied in Scotland including Sofa Salikenebo. We focused especially on the dun dun parts and variations which are much fun to play and dance to.

After playing outdoors all afternoon we moved indoors and by 10pm I was exhausted so went to bed early, sadly being totally unconscious when Ian rang the doorbell at midnight :-/

We started Sunday with Ade's joyous song "Kimbele", before moving onto the hard stuff: a great big Guinean groove called Balakulajan that I had spent the whole of Friday notating (including eight sections of the virtuosic solo). We didn't have time (nor ability!) to do the solo (yet...!), but it was great to get the pattern rocking with everyone playing its characteristic fanfare introduction in unison, for which we made up a nice phrase to remember it by:

I was pleasantly surprised by the high turnout today: most of our drumming group came along plus a few others, and the weather was stunning. We sat down for lunch in the meadow beside the apple tree and all was a haven of peace and friendship. Patrick truly rocked in the kitchen with a fab rice pasta dish with walnuts and freshly chopped basil. Then Sasha arrived with an apple cake she'd made using the apples I'd given her last week. The tree smiled, as folk juggled its plentiful fruits :-) 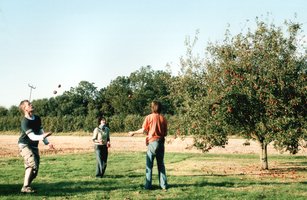 I had purposely saved the best music until last: Soboninkun which Mockoulo had taught and I had struggled with at the time, but I knew it wasn't beyond me with practice. (I neglected to tell my guests that these rhythms we were learning were all from Advanced Djembe classes! ;-) The cool sangban part (that had bamboozled the player in Scotland) had Tony's name all over it, and Steve from Vitae Drum Circle joined him on a solid dundunba part, playing the drums who sat proudly on their new stands that he has just hand-made for them (Cheers, Steve! :-) Ruth made up the dun dun team playing kenkeni very nicely. How can just eight notes sound so funky? We had much fun with the djembe break which never fails to raise a smile :-) I was very pleased with everyone's efforts in trying to nail this hectic music; the look of pained concentration was obvious, but people persevered, even those who claimed to be Beginners stuck with it and in doing so turned a corner. 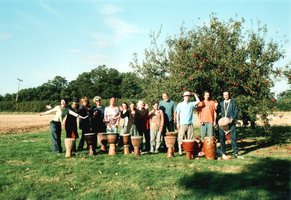 At teatime some people had to go, leaving seven of us to continue. Since the energy was so special today, I unearthed a long-lost song called Canopus that was yearning to be born. I'd written it back in 1996 (!) while at The Cottage with Ian, when he'd been ill and I had played it in the hope that it would do some healing magic (well, he didn't die... :-) Anyway, we had fun singing it and hope to perform it at next Sunday's Garden Party.

Teresa summed it up in her comments:

Boy did I sleep well!!!! Thanks for a fabulous day in wonderful surroundings, with great company. Particularly loved:

En route to Vitae Drum Circle, I called in again at Talkin' Headz to buy some tools for work, including an 11" LP Compact Conga. Wow! This thing is amazing and bizarrely sounds like a proper *good* conga, minus the bass of course. The (synthetic) skin and feel is spot on. As soon as I played it I knew. Seeing Giovanni's signature on it just clenched the deal; the high price is justified as this is a serious piece of kit, no toy. The great thing is that it fits into a record bag and can be carried around anywhere (*stealth attack*). It's tunable, and mounts onto any snare drum stand, or can be played flat on the floor or any suitable surface; with skill you can balance it on your lap but it does sometimes move about if you play frantically. You could maybe even play frisbee with it, but watch out because it is solid aluminium (v. heavy!) and will kill you (*Oddjob*). It is only a matter of time now.

I showed it to the drummers that night and Dennis immediately started to play it under one arm with a stick like his bodhran, which sounded really cool (although totally different to a bodhran). This would be quite difficult with a regular conga! Remo make a similar drum.

While in the Aladdin's Cave, I also got some lovely LP Jam Bells, a black pair Meinl of shakers, some drumsticks, and ordered a Remo spring drum, cowbell sticks and caxixi. 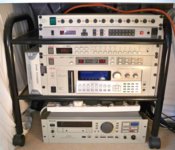 Into London to buy an Akai ME35T drum-MIDI trigger unit for my studio that I'd won on eBay. It has eight inputs for drum pads or microphones to convert the audio signals into MIDI, so I'm hoping I can use this to sequence/notate drum patterns in real time as well as triggering electronic sounds from acoustic sources.

On the way home I collected Dafna and took her to Michael's Folly ready for her singing workshop later. Beforehand Fabrizia and I rehearsed her dance piece.

Dafna's singing workshop was sadly not well attended, but those who came enjoyed her wonderful warmups and sang two songs: one in Hebrew and one in Arabic. 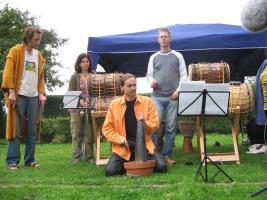 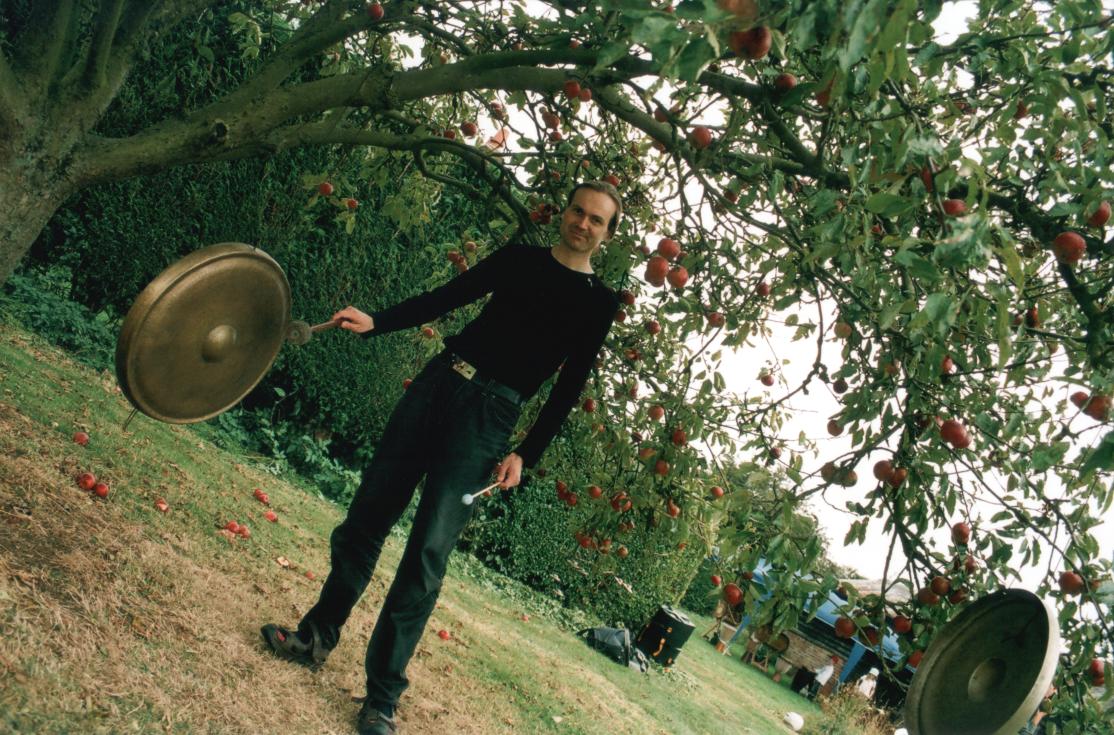 At my first official Garden Party, we had a jolly nice time :-)