This piece was begun in February 1993 during an intense time at University. It soon developed from a simple piano piece into an extensive orchestral work in three movements, and shares common themes with my Flute Sonata, begun later that year. These works were my first large-scale compositions, and I was fascinated by the way certain musical ideas seem pre-destined to go at the start of a piece, some belong in the middle, and others could only fit at the end. Indeed, turning on Radio 3 midway during a well-composed piece (or even a well-improvised piece such as what I heard on Radio 3 at 2004-12-12 15:23 - the organist Olivier Latre improvising on a Bach chorale at Birmingham's Symphony Hall), one can often guess whether it has just begun or is soon to end. If anyone can explain this phenomena in words, I'm all ears. 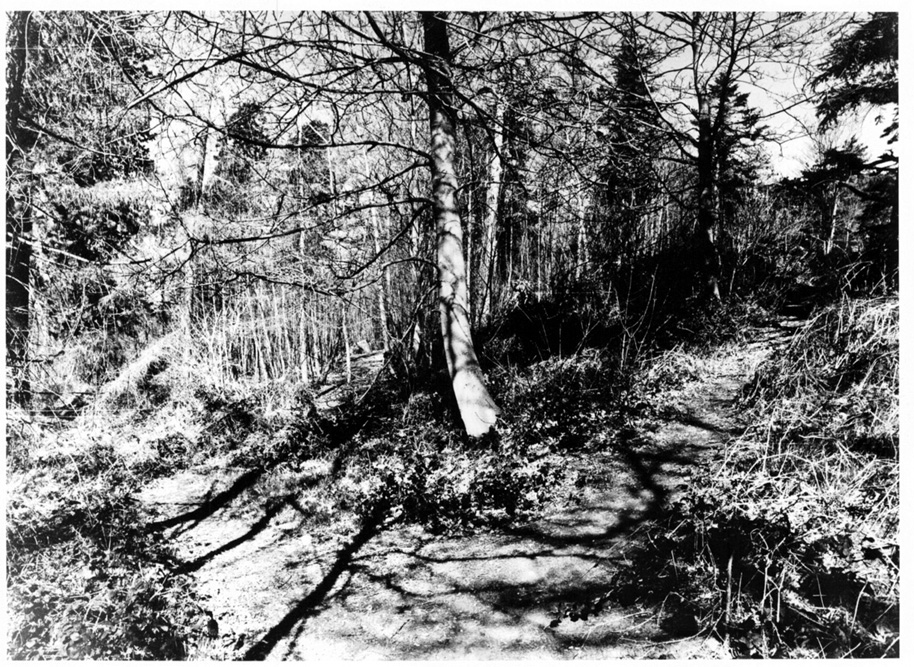 The work is unashamedly programmatic, charting the voyage of a man/ship/planet on the brink of destruction. This photograph of "The Tree Of Fate" by Craig Morrison shows two paths, one leading to the light, the other to darkness. It is your choice.

The three movements are subdivided into various themes and sections:

There are many radical and controversial ideas employed throughout the work, which may make performance financially and technically difficult to realise, especially due to the large and unconventional percussion section. It also requires a large acoustic space, of a particular architectural design for some of the spatial effects, which would rule out some venues.

It is scored for a large chamber orchestra with a wide range of instruments:

Most orchestral music has relatively few parts, but lots of players on each instrument - trust me to be different! I decided to break with tradition, largely inspired by the Chamber Symphonies of Arnold Schoenberg and John Adams, and not use a huge string section. Although there are many players, most of the time they are not all playing together; the idea is more of a variety of chamber arrangements painting new and different tone colours, with only the occasional orchestral tutti.

The First Movement is fully written out in short score, with all of the parts fitted onto 12-stave paper. The Second and Third Movements are still only sketches, but are almost completely composed; the only major section still to be realised is the finale. I did intend to score the whole thing out - I even went out and bought 36-stave manuscript paper, but it was too large for my desk and the staves were too tiny to write on. I wrote out the first page (and sent it to Vernon Handley!) but was then too daunted to go any further on paper. After the ridiculous amount of time that the First Movement took to copy out (not even including parts!), I realised that I must transfer it to computer, as once digitised, it will be much less work to edit/print/make parts. So I shall check out a few notation programs and decide which to use, probably Lilypond+Denemo or CMN.