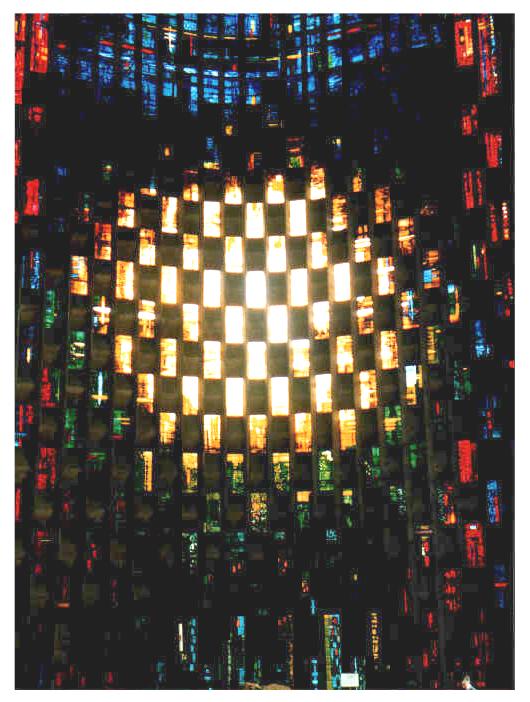 This was a project of mine while studying Electronic Music at the University of Hertfordshire in 1993. Having the music department's extensive range of (then) state-of-the-art equipment at my disposal, I realised a way to produce a rudimentary form of additive synthesis, using off-the-shelf hardware configured in a new way:

Each Akai sampler could replay eight sine waves through its eight separate outputs, which were then mixed by the four Yamaha mixers, creating a 32-channel system. The samplers were set up with pitch offsets to play each of the first 32 harmonics above a fundamental played on a MIDI keyboard. The signals from the mixers were cascaded digitally and reverb was added to the final mix.

Thus, by moving a fader, the level of any harmonic could be adjusted. These changes could be recorded in real time as MIDI continuous controllers using a MIDI sequencer or computer along with the basic note data, to then be edited and replayed. The automated moving faders of the Yamaha mixer can recreate timbre changes and makes for a very tactile performance instrument, which had the uncanny effect of seeming like unseen hands at the controls... (In fact I did make one piece called "Ghosts In The Machine" which exploited this spooky behaviour with Mexican waves of fader movements like a football crowd ;-) Obviously, this would never be fast enough to create complex real-world sounds such as a piano, but it excelled at spatial sounds and rich textures. This was one expensive, but lovely, monosynth! :-)

In order to keep the harmonics within the range of human hearing, a 32-harmonic system would have a 4.5 octave fundamental pitch range of 27.5Hz to 660Hz (A-1 to E3) with the corresponding 32nd harmonic ranging from 660Hz to 21120 Hz. While the higher notes would have sufficient harmonics within human hearing, once you lower the fundamental pitch, more harmonics are required than the system generates, and the 32nd harmonic descends into the mid-frequency range; this results in the low tones sounding less bright. Here's an example of the pitches and frequencies of the 32 harmonics of a low A:

As you can see, the first 32 harmonics of such a low-pitched note barely exceed the human vocal range, so really, many more partials than 32 would be desirable to fill the entire audible range with harmonics of such low notes.

Special effects included setting the pitch-bend range to be equal on each sine tone, such that the harmonic ratio was warped as the pitch bended. Since the Akai S1000 could handle 16-note polyphony, each sampler could in fact manage a two-note chord in each of its eight outputs. And the system could be instantly changed into other configurations, e.g., 16-harmonic 4-note polyphonic. I also designed a simpler setup without the Yamaha mixers, just using MIDI volume messages directly from the computer instead of the faders, but this wasn't quite so much fun without the hands-on approach!

Sadly I never got around to completing a full-scale composition using this setup (it took some work just patching it up every time!), although these configurations were used in Song Of The Goddesses and Deep Space. I still have the Akai S1000 program disks, and this gear is dead cheap now compared to the thou$and$ it cost back in 1993, but nowadays there are easier, more powerful and higher fidelity ways of achieving these aims, using just a computer with a large multi-fader controller. I'll catch up one day...