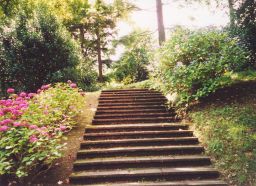 Valiant Steps was written for the oboeist Nancy Proudfoot, whose playing impressed me at a BMIC concert given in the charming music room at 10 Stratford Place in London (before it moved) by students from Wells Cathedral School on 2000-02-08 (the same event that inspired A Time On My Island Of Art). My piece was written later that night and completed the following day, my quickest composition to date; it is very short, but hopefully its simplicity is its strength.

The title is a lame pun on her surname, and the music conveys having the courage to make bold decisions. It showcases the soloist's langourous liquid lines and high stratospheric pianissimo oboe clouds. The piano part is simple but has some wide hand stretches unsuitable for children. A grand piano is preferable to an upright, as the oboe is occasionally asked to direct the bell towards the open body of the piano to resonate the strings.

I sent a copy of this score to her school, for which she thanked me, but it remains (to my knowledge) unperformed and I have yet to find an oboe player to record it. Noble oboeists and courageous pianists are welcome to take up the challenge...

...Or: this piece lies within the compass of flute, clarinet or violin so they could perhaps substitute instead, although I've not checked for any insane fingerings. [That link is safe and fun but maybe don't Google that phrase ;-]