This group is no longer active.
For more drumming in Herts, see:
https://www.drummingisfun.co.uk/ 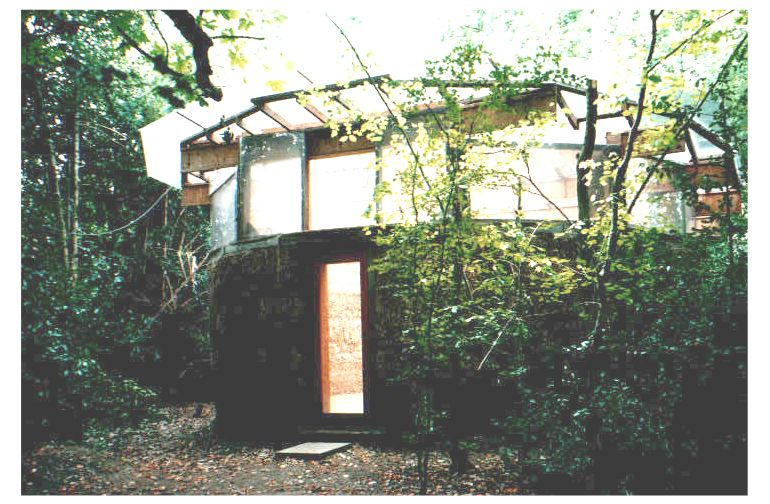 We are a community drumming project who meet at a secluded location in woods near Hertford to play music from Africa and beyond. Our secret base is The Strawbale Studio, a round dance studio made of straw, which has a good dead acoustic that absorbs loud sounds, making it ideal for drums. The clear roof also provides direct sunlight and an enveloping sense of being surrounded by nature.

We have been playing together here regularly since 1998, having decided to form our own group as there was no other in the area; we'd previously attended African drum classes in London, and performed with The Watford Percussion Project until leader Molefe Pheto returned to South Africa. Our players come from Potters Bar, Hatfield, Welwyn, St. Albans, Stevenage, Hitchin, Arlesey, Shillington, Clophill, Biggleswade and Luton. Recently we've also been rehearsing near Ampthill in Bedfordshire. We subsequently discovered another group in High Wycombe, and continue to forge links with other drummers in Herts, Beds and Bucks. I'm also happy to announce the formation of my new group in Bedford, and evening classes at The University of Hertfordshire.

The Secret Bass group covers a range of abilities from beginners to advanced intermediate players. A crack team of experienced players are currently in training for stealth missions into dangerous territory. Our first public appearance at the Festival of Song, Drum and Dance on 2005-07-23 was warmly received, and we enjoyed playing alongside Vitae Drum Circle at Art In Penn Woods on 2006-08-19. In 2007 we played on Sunday 2007-06-03 at Little Berkhamsted village green, and then stormed the castle at Hertford Fun Day on Sunday 2007-06-10. On 2007-09-07 we also played for the Multiple Sclerosis Trust to raise awareness for their My Supper campaign. In 2008 we played at a charity dinner for Essendon International Evening on 2008-04-19, and at Hertford Castle on 2008-06-01 as well as doing a professional recording session. These days we don't perform very often but continue playing for the love of it.

We are primarily a drumming group, although dance also played a major role for a couple of years when Marta Checchi taught here before she returned to Italy. We also enjoy singing traditional songs from around the world. Most of us use djembes and percussion to play drum music from Nigeria, Guinea, Gambia, Ghana, Senegal and South Africa. Here are some rhythms we play. We now have our own set of dun duns which were hand-made for us by a friend in Guinea and shipped over, so now we can fully live up to our name and extend our repertoire down into subsonic frequencies.

This group is no longer active.
For more drumming in Herts, see:
https://www.drummingisfun.co.uk/