Went to see a performance of free improvisation by world-renowned percussionist Eddie Prevost, famous for his thirty year career with revolutionary group AMM, and my friend Roberto Filoseta on piano and electronics, held at my old haunt, the University of Hertfordshire, as part of their Mayfest week of events.

Roberto was playing an amplified Bechstein grand piano, processed using a Yamaha 01V digital mixer and relayed to the audience over a Genelec 5.1 surround system. Eddie had some less hi-tech, but equally inventive, gear - hardly your average drumkit. It consisted of a 26" tam-tam given to him by his sponsors Paiste, which he played with all manner of bows and beaters as well as a curious electric motor which moved a small stick to strike the edge at high speed. He also had a snare drum which was never struck conventionally, but instead used as a soundboard to amplify the sound of some handheld cymbals and a small Tibetan singing bowl, which were also bowed. But his mightiest instrument was a huge wine barrel which he said he'd got from a restaurant and converted into a radical instrument by mounting a drumskin across the top, thus resembling a massive obese conga. This had then evolved further by the addition of a set of harp and bass strings stretched tightly over the rim of this drum head, and using an ingenious solution for a bridge: a tiny metal darabuka drum lying on the large drum head, over which the strings were tightened to give a round bridge which would not pierce the large drum skin. The result was amazingly deep double bass-like sounds when the strings were plucked, tunable by lugs on the 3' x 2' barrel body. Similarly resourceful, Roberto used a myriad of devices directly on the piano strings, including an egg-whisk, soft beaters and fingers.

After an extended improvisation, Eddie talked a bit about what Free Improvisation entails and answered some questions. I asked what an improvisor should do if the other musicians start playing something (s)he really dislikes; should they try and interrupt or sway them onto a new idea, stop playing or what? He answered that you should go with it and see where it leads, but I wasn't particularly reassured by this answer. For me aesthetics is of vital importance, and if I am involved in something I find that I disagree with creatively, I will go and do something better instead - there is just not enough time to waste. This is why I would prefer not to play music for money: I'm not willing to compromise my ideals for those of the highest bidder or loudest shouter.

I have taken part in many improvisations - lots have failed miserably, some have just been run-of-the-mill or predictable, but some rare events have sparked serious magic. Some recordings we've made sound like they have been composed by the gods themselves, and witnessing this happening in real time before your very eyes is an incredible experience. These alchemical occurrences radically affect you, and inspire you on the Path to seek more, but are often limited to certain combinations of people and environments, when everyone happens to be feeling at their very best and the atmosphere is electrified. Alas, in practice, this is hard to reproduce and at best unpredictable. This is the major problem with Free Improvisation - there are good bits, but the signal-to-noise ratio is usually very low, and you have to wade through hours of mediocrity to get to the good stuff, except in exceptional circumstances such as when the players have known each other's music for years/decades and can anticipate their next move. So asking an audience to sit through that mediocrity with you makes quite a demand on them, hence audiences tend to be small and dedicated.

For me a better approach is to record improvisation in the studio (or anywhere with a suitably exciting atmosphere) first, and then edit the gems out of the bare rock afterwards, possibly reworking ideas into new compositions that can be rehearsed and performed later, perhaps with further improvisation during performance. This is something I plan to work on when my studio is operational, mining my archives of early recordings, and crafting new compositions from future improvisations. Other plans would include some Free Improvisation live on stage amidst a set of pre-composed material, albeit guided by pre-arranged rules and extra-musical ways for the musicians to communicate.

After the gig I helped Eddie pack up his instruments, and chatted over the buffet - it turned out he too was a former student here at Hatfield some years before, and we even shared a common Philosophy lecturer. He related an amusing anecdote that when it was first established and they were thinking about the name for the institution, because of the links to the nearby British Aerospace works, the original name was going to be "South Hatfield Institute of Technology". Luckily someone dissauded them before they made any signs and headed note paper, and it became Hatfield Polytechnic, thence the University of Hertfordshire.

Excited by the deep basslines at both Winterdrum and Vitae Drum Circle, and eager to have some of own ready for our Secret Bass performance at the 2005 Festival of Song, Drum and Dance, we have ordered a set of doun douns from a friend in Guinea. They will be hand made in traditional style and shipped over for us: two kenkeni (the smallest size), one sangban (medium size) and one dununba (large). Roll on July... ;-)

The Old Man of Storr on The Isle of Skye

Bought a few records and cleaned some of my old rare vinyl at C.R.A.V.E. Later on, following on from my discovering my old song lyrics for "Skye Song", I looked up the Isle Of Skye on the internet, and discovered with some amazement this image of a huge rock formation called The Old Man of Storr. Wow!!! This is the place of Old Dreams! Now I know that I really must go over the sea to Skye.

The piece is a large-scale work for two dancers (Fabrizia and Ashley) and two percussionists (Trevor Taylor, artist, author and owner of FMR Records, along with Roberto himself), and features a vast array of instruments from grand piano and conventional tuned percussion to amazing sound sculptures (or Structures Sonores) designed by The Baschet Brothers and the performers. These included an amazing instrument called the Cristal, a 1950s avant-garde sound sculpture designed by The Baschet Brothers and Jacques Lasry (father of Magma-keyboardist Teddy) in which a large steel sheet amplifies sounds made from rubbing wet fingers along glass rods, creating an ethereal sound rather like a trombone. Other objects included steel wires to be scraped and bowed, also with strangely shaped resonating chambers like aliens. Some sounds were amplified and processed by a sound engineer at the rear of the auditorium. Microphones were situated at the front of the stage to pick up sounds created, and more were hung from the ceiling to pick up a tower of gongs and special metals suspended on scaffolding in the centre of the stage.

Ashley began the performance seated motionless on the stage for many minutes as the audience filed in, before startling us with sudden shouts and groans. He then moved around the stage draped in chains, until he met up with Fabrizia. She had emerged stealthily from the back of the stage covered in cloth, and climbed onto the scaffold of percussion, draping herself around it and crashing against the metal gongs and sculptures in violent outbursts. Ashley then seemed to free Fabrizia from her bondage, only to replace it with his own chains. Later, Roberto entered into the action himself, wandering in to charm Fabrizia with a Middle Eastern wind instrument, beautifully treated with echoes via a radio mic, creating a mesmerising tapestry of sounds. He danced around her like an invisible spirit from another dimension showing her a higher reality. The piece ended sublimely with Fabrizia opening her eyes as the lights faded to black...

This work explores the condition of being enslaved, confined, trapped, physically or mentally... or both.
It may be real or imaginary, given or self-inflicted, accepted with resignation or fought against.
What is freedom if not the luxury of choosing your master?

It is scheduled for its next performance on 2005-08-07 at The Priory in Southend, Essex. Afterwards I couldn't resist going backstage to thank the performers and catch a closer look at these fabulous instruments. Offering to help pack away for the second time this week, I once again had the opportunity of carrying a large tam-tam out to the car, though sadly not my own. I could really use one of these for one of Ruth's songs - any sponsors/donors out there? :-)

Went with Bizia, Roberto, Helen, Tina and David Raynor to see African Drum and Dance group Zomba Zulu at the final event of UH Mayfest 2005. Three dancers but only two drummers - I felt they were outnumbered, and needed help; I'd brought my secret stealth claves in my pocket, in case I was called... At the end of their performance, they invited people from the audience up onto the stage to dance, so we leapt up to get down and I did my best to hold down a very swift clave. 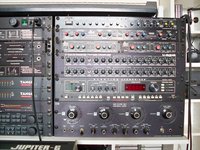 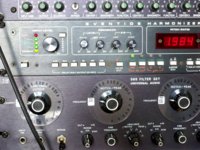 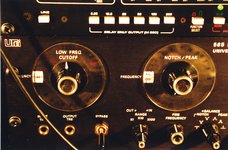 This will become part of the Ululating Feedback Occultifier.

A strike by BBC workers meant some quality repeats today :-)

Tried to reinstall Fabrizia's computer at Michael's Folly, but dialup failed again, so instead we watched my latest BBC Training film for a giggle.

My landlord phoned me to arrange a viewing of my house with an estate agent; apparently he is now considering selling it, but will give me the longest notice possible. This is probably for the best, as I am running out of space (as personified directly by last night's purchase of a (perhaps superfluous, but lovely) UREI 565 filter set), and the noisy neighbours are a right pain: I need musical freedom! :-)

I shall not make an issue out of this (yet!), but I am considering moving a bit further north up the A1, above Letchworth maybe at Stotfold where I can still be close enough to my friends and life, but a bit cheaper. Luton is also cheap but not my favourite place. I'm quite happy to slum it a bit though in the quest for quiet and space. My time travel backwards from 20th Century to Edwardian cottage loft to Medieval cottage has probably come to an end, or at least a temporary glitch until I find/build my Gothick/Neolithic Abbey ;-)

[UPDATE: The landlord seems to have given up on the selling idea, so I'm staying put for now.]