More of the same from yesterday, this time at Potsgrove near Woburn, so afterwards we lingered and walked in the parklands around Woburn Abbey, falling asleep beside the lake of dragonflies. All in a hard day's work!

Dafna returned to England to teach us some more traditional Middle Eastern songs. Ruth has been passing on the knowledge of these songs at her own singing classes throughout this year. The third song Dafna taught today, called Kol Ha'Olam Kulo, describes the world as being like a narrow bridge. Don't look down! Dafna also taught a circle dance to accompany it, which provided an enjoyable triple challenge to co-ordinate foreign lyrics + melody + body movements in three dimensions, a challenge which proved too great for me :-) I fear that if I was on a very narrow bridge, I would not be trying to sing and dance at the same time! Steve also wrote about today's workshop.

Afterwards we chatted over tea, then picnicked in the woods before I ferried Dafna off to Oxfordshire for the next leg of her English tour. En route she made sure I knew both parts for a popular song she'd taught in 2006 called "Hava Nagila", both the melody and the accompaniment she's composed.

African Drum Village is the closest you can get to experiencing Africa whilst staying in the UK. This year runs from Tuesday 5th August until Saturday 9th, leaving time to travel back from Scotland on the Sunday. Last year was fab, and as a result, this year is already totally overbooked!

[UPDATE: Unfortunately I can no longer afford to go this year.] 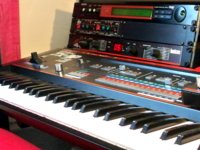 The studio has acquired another rackmount unit: a Lexicon Vortex audio morphing processor.

While a student living in shared houses, we would often lose things (not just our minds). So if something went missing, it was described as being in The Vortex, a place of uncertain physical location, perhaps residing in a parallel dimension; objects would remain in limbo there for an unspecified time, before later reappearing in our Universe, possibly in a completely different place to where they could feasibly have been left.

So this Lexicon Vortex will be of invaluable help in the studio, to come to the rescue whenever a track is losing badly or a particular instrument just not sitting right in the mix: "OK then, send it into The Vortex...!"

Audio transmissions from The Last HOPE

Recordings have been released from The Last HOPE conference. This is basically a massive gathering of thousands of the brightest minds on the planet, who meet up in a hotel for a weekend of talks on the state of the art in computing, digital media, security, future technology and related research.

Featured speaker Jello Biafra's 114-minute talk was so spot on that I felt compelled to write about it. In an enlightened dash round topics as diverse as sustainable economics, American regime change and The Rapture, he also exposes Facebook's evil Beacon services, Google's massive infogathering, the suppression of the electric car industry, and other modern phenomena. SPOILER WARNING: if you'd like to listen to the 2-hour lecture, then skip the following edited highlights I've transcribed below:

That's just a starter. The talks on Social Engineering are of course great too, showing just how easy it is to get (even secret) information from people. TProphet's "Phreaks, Confs and Jail" HOPE talk had a nice anecdote about Prank Calls:

"You could dial up Fred Meyer [a shop], and if you convinced them to transfer you to a particular extension then you would be on the in-store announcement system for the store, and you could make any announcement you wanted over the phone and everybody in the store would hear it all throughout the store, and there was no way that they could make this stop, except by powering down the phone system which nobody knew how to do cause AT&T ran it and they had to get AT&T out to power the system down. [...] It was great to make ludicrous announcements! Did you know that if a price of some item gets announced over the in-store system, they legally have to honour it? :-) So there was an absolute run on bananas one day: people went bananas for bananas - they were only 9 cents a pound, it was a great deal. I think they completely sold out of bananas..."

Possibly the most amazing talk was from another featured speaker Steven Rambam, a private investigator who knows too much and was arrested by armed FBI officers just before his lecture at HOPE two years ago on false charges that were later dismissed. He gives frightening insights into:

The scary thing is that all this data being gathered and shared is held by private companies, so the Freedom Of Information Act is powerless to help individuals. You'd better just HOPE that they don't make errors. You can listen to the whole three hours of this fascinating talk (split into two files). Or you can just go back to sleep.

Massive progress has finally been made on my mammoth studio wiring project. I've been working round the clock for weeks now, pulling together months of planning and design, drawing up vast diagrams of hideous ever-changing complexity, crawling under furniture in confined spaces and battling with spiders and cable snakes. The goal is to make cables (colour-coded for different equipment) of the exact length needed (to avoid having masses of coiled serpents lurking behind the gear), while allowing some flexibility of setup and access. Hindrances such as limitations on maximum lengths for some types of digital cables, and interference concerns keep this non-trivial: mains and audio cables must ideally not run parallel in close proximity, although crossing at right angles is OK.

It seems that for months I've been close to getting things right, only to then have to redesign due to unseen factors, and changing one thing requires countless other alterations. Some changes mean rebuilding entire racks of kit and some are just plain impossible without help for heavy lifting involved. I'm certainly pushing the limits of what can be achieved on my low budget in a small untreated room. OK, my task is by no means as epic-scale as these guys, but there's only one of me and I'm hardly an electronics specialist (yet).

I'm happy to report that mains power and MIDI connections are finally in place so I can now at least power everything on! Since most devices run on less than 0.5A of current, it is fine to power them all (more than forty!) from one mains wall socket, using proper mains power distribution units; indeed this is necessary to prevent ground loops between two earth pins. Many of the important audio connections have now been completed too, although others still remain unfinished for now; at least the basics are ready for a minimal working setup. Where possible I'll be using specially-adapted unbalanced-to-balanced cables to connect unbalanced gear to the mixer to prevent ground loops causing mains hum. I will need to add a patchbay at some point, but will initially have everything hardwired until I figure out exactly what my routing needs are. There's certainly enough flexibility in the equipment I have to keep me busy for at least a dozen albums without even considering reconfiguring it in different ways.

I Dream Of Wires

Today I recalled the (great) Gary Numan song "I Dream Of Wires" (shop!), and realised that yes, I do in fact do exactly that. My gearlust has turned from synths and outboard (mostly satiated now...) to desiring simple leads, even cable trunking(!), a much cheaper habit. While out walking in the countryside, I find myself longing for some very short MIDI cables and a nice pair of red balanced-unbalanced 4.5m cables to allow my JX-3P to sing loud and proud (it's currently only in mono due to a shortage of long enough cables - *sigh*). I'm ignoring the titters from the Freudians in the back row giggling about the phallic symbolism of plugging in serpentine leads, since my happiness is a purely practical one, in that now I can finally start to hear some of my gear again, altogether instead of just one at a time(!). It is quite crushing as a musician to not be able to play your instruments. Hopefully this new wiry passion will drive me over the edge of my solderaphobia, since you just can't buy these objects of my yearning anywhere; my only hope is to make them myself and I already have all the parts waiting at home for me to learn how...

Soon I must turn my attention to resurrecting the olde music computer and upgrading its obsolete software to 64 Studio. I need to get some more hard drives too. Really what I need to do is set up that machine as a fileserver with a few 1TB drives. Then when I build a new DAW, the fileserver can keep backups of all my music (and other files).

So I am edging my way slowly forward, towards the light...

After a lousy day of bumping my head against mounting money worries, I was feeling really down. It's much harder than I ever expected trying to survive self-employed. It seems weird that even finding work is difficult, and then you have to actually do the work as well = double the effort! I suppose life can't be fun all the funking time!

So I stumbled about online only to find a year's worth of BOFH episodes I'd missed. No wonder I was having a bad time, with such a deficit! Three hours of catchup later, a smile was back on my face. These are the finest. Next time I get the blues I'm going back to re-read the previous years...