British researchers affiliated with Zenatode Labs have made an important discovery in the field of Time and productivity research. They claim to have unearthed two extra days in the week, which had previously not been noticed by earlier observers. Details are still sketchy, but their work is due to be published in scientific journals later today, hopefully before noon. We are proud to bring you this firsthand report from one of the scientists involved:

"The two extra days come between Saturday and Sunday in our traditional Gregorian calendar. They were discovered following extensive studies which for many years yielded little results and much insomnia. We've actually been experimenting with the new days for some months now, but didn't want to make a premature announcement until we had definite proof - besides, it's been fun enjoying these extra days sleeping and surfing the internet :-)

"So we've already named them: Yawnsday and Websday. We were really trying for a third, since everyone needs a Lovesday as well, but for now at least, we're stuck with just the good old nine-day week, which won't please those metric/decimal time fanatics either. The fact that the extra days come at the weekend, we see as a definite God-given Right that they shalt not be abused as work days, like Sundays have now become, and we have therefore already obtained relevant patents and bribed judges in corresponding jurisdictions to ensure this is upheld. Economists will no doubt revel in the fact that increased leisure time will inevitably lead to more consumption, increasing profits. Obviously many of the world's systems will have to be updated, so our team has been working with the Linux community who have coded the necessary algorithms to ensure that Year 2038 and Year 10000 bugs are not delayed by the extra days.

"The reason nobody has noticed the extra days yet is that they are very small, despite containing the full twenty-four hours. Quite why this is, we still have many inconclusive theories, but this has led to their lack of adoption in human society. The portal linking Saturday with Yawnsday took some finding, and tends to move around a lot, which rules out heavy drinking the night before. One other thing to bear in mind is that the return gateway from Websday to Sunday is deceptively dangerous in requiring a certain degree of concentration whilst in deep dream sleep to make it through without remaining trapped in Websday. Tragically, we lost one of our team as a result of this, and despite many rescue attempts, we have been unable to locate him. So be warned.

"We are confident that once everyone hears about this extension to the weekend, that they'll all want some. We are in discussions with major world leaders about possible missions to widen the entrance using either TNT-blasting, worm holes or quantum computing. We have ruled out tourism expeditions for the superrich on ethical grounds, as we feel it should be open to everyone. In making this announcement on a global scale, we hope to once and for all make a bid for freedom for every human to extend their lives, and finally have enough time to answer all those emails, mow the lawn, finish that novel, etc. 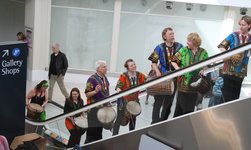 Vitae Drummers returned to the Eden Centre in High Wycombe to reassess its structural integrity with deep bass rhythms for their second African Caribbean Day. Sadly there were no glass lifts for me to play my dun duns in! (*shatter!*) But we had fun with djembes on escalators, and enjoyed the huge acoustic in the concrete stairwells!

This party continues my month of birthday celebrations so pick your favourite party or come to them all!

You know I hate to ask -
But are 'friends' electric?
Only, mine's broke down
And now I've no-one to love... 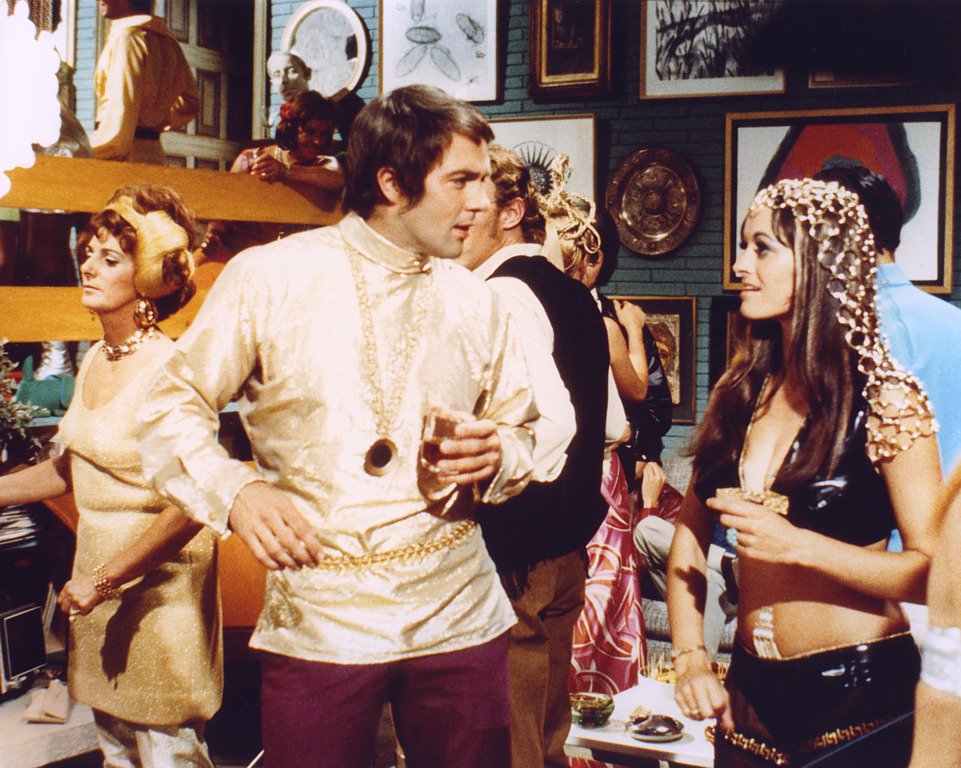 This party has had to be cancelled due to lack of interest :-/ If anyone is still interested in having any kind of fun, get in touch and we'll arrange a new date.

DJ Spock had been busy in a decidedly retro mood combing the archives of classic film and TV soundtracks. He was hoping you'd come in fancy dress disguised as your favourite TV/film star, and chances are he'd probably have the theme music to be able to announce your arrival with a fitting fanfare.

Secret Bass drumming group and Fabrizia were invited to perform at a charity dinner at Essendon Village Hall in aid of a new stained-glass window at Danesbury Home for MS sufferers in Welwyn. Tickets included a 3-course meal of world cuisine and also Irish dancing and a Handbell ensemble.

As a result of lots of good work publicising the event, it sold out, and so we all gathered to set up the hall as the villagers and friends arrived. Tessa Verrecchia gave a speech about how the hospital's patients' own artwork was contributing to the design for the window she is creating. After the Irish dancers' performance, I accompanied Fabrizia's classical Indian Bharatanatyam dance with Tibetan Singing Bowls and percussion, adding sparkling sounds as she told enchanting stories through dance. Some of her students from the village also performed.

After the meal, a raffle and auction was held to raise money, and then the Essendon church bellringers treated us to a display of handbell ringing, which was delightful. The sound is pure and clear like my bowls, and they gave inventive renditions of popular tunes, as well as a fine demonstration of change ringing, standing in a line wearing numbers and swapping places to simulate how ringers in a tower alternate the order of play. I was sorely tempted to ask if I could write a composition for them, but perhaps I have enough going on at the moment - maybe one day...

Finally Secret Bass processed into the hall singing Suley Maniye and regrouped on the stage where our instruments awaited us. We played Kuku, Yankadi+Makru, the Gambian rhythm and Afrocubanites, our big drums sounding huge in the reverberant hall (all of our recent gigs had been outdoors, where the sound dissipates). Fabrizia danced to Yankadi with beauty, style and grace, and our band members swapped instruments from song to song, demonstrating their multiskilled nature. By the looks on the audience's faces and considerable cheering, I think the locals had enjoyment :-)

After cries of "Encore!", we performed another song - Djole - in which we got the audience to sing and clap along with us in call and response. Afterwards I spoke with many people who were entralled by the drums, and met some other local drummers which is always good. Congratulations to all who took part and helped to organise this event, which raised money (final amount to be confirmed) for charity.

Vitae Drummers celebrated the birthday of one of their own, in the same pub that we'd played at back in 2006. We performed the epic Moribayassa for the first time ever, after studying for a year (!) the 3-minute long extended break and dance. The result was totally explosive, and the dazed audience could hardly believe that was only our second song, and we were going to continue the percussive onslaught of joy. We truly attained a new level tonight, so watch out Wycombe!

In between our two sets of drumming, Justine sang a stunning collection of songs accompanied by dextrous guitarist Jill. They made a great combination and I look forward to more gigs.

Tony from Storm Productions came over to The Strawbale Studio to record some of the Special Agents of Secret Bass drumming group. For many, this was their first proper experience of recording, but luckily we were in safe hands: Tony is a true pro and calmly handled all the challenges we could (and did!) throw at him.

We started before noon and just unloading all the gear took two hours! He came armed with a car full of mics, cables and stands, to match my car full of drums, as well as a 16-track digital recorder, mixer and UPS to power everything. That was just the tip of the iceberg: "the lightweight stuff". His heavy gear requires trolleys to move the amps and UPS's. I couldn't lift the "light" UPS he had there. His car has modified shock absorbers to cope with the weight!

It's great that he brought enough mics and stands to be able to just pull out what was required at the time. We began by setting up stereo overheads (Rode NT4) on a massive 3m high stand balanced just above the ceiling, and then added close mics for all three djembes (AKG C451), the three dun duns (Rode NT1000 and Beyer M160), plus four backing vocal mics (AKG D5) and shekere (Beyer M201). My lead voice used a Shure Beta 87A, my lead djembe was captured by my Sennheiser MD421mkII, and another NT1000 mounted near the floor picked up my djembe bass and ankle bells.

We'd chosen just four of our best pieces to record, and got a few takes of each within the three-hour session:

We also had two video cameras filming the proceedings, one aimed at the djembe players, and the other on the dun duns. Hopefully when we can figure out how to edit the video footage we may even end up with our own short film! Until then still photos were taken, some of which may hopefully end up here soon.

Afterwards I was very tired from the 11-hour day without food and lots of heavy lifting, not to mention playing, but felt content at our achievements. I look forward to hearing the results and cringing at my mistakes when I go over to mix it, and it will be great to finally have a demo CD to play to people and for students to acquaint themselves with the music.

[UPDATE: I am happy to announce that "Limited Edition" CD-R copies are now available. Contact me to reserve yours before they run out.]